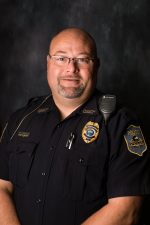 The Police Chief is responsible for all police functions of the City, which involves planning, directing and controlling patrol, traffic, criminal investigation and related activities and services. The Police Chief also ensures the proper training, assignment and discipline of all departmental members. Mark Warburton is a 25 year veteran of law enforcement and has been a member of the Spencer Police Department since 1997. Mark was appointed Chief of Police in 2014, where he currently supervises a 20 member police department and the Clay County Communication Center. During his law enforcement career, he has held many different positions within the department including Defensive Tactics Instructor, Special Entry Response Team Leader, Field Training Officer Supervisor and ALICE instructor. He is currently a member of the Iowa Chief of Police Association, International Association of Chief of Police, Clay County Communication Board, and is Vice President of the Clay County 911 Board. He and his wife Roxanne and their three children are proud to call Spencer home.

The City of Spencer was originally named Spencer Grove and in 1892 John Ancken was appointed as the first law enforcement officer to serve that community. Since that time, the name of the city was changed to Spencer and the police department continued to grow with the community. In 1936, the police department had four officers and acquired the first patrol vehicle, which was a Model A Ford. In 1940, there were six officers on the department and they still responded to a red light outside the police department that was activated by telephone operators when they received a call for help. In 1948, the department had grew to eight officers and it was during this time frame that a police radio system was installed and the red light warning system was abolished.

Spencer Police Department Mission Statement:
“To protect and serve the community of Spencer in a fair and professional manner
while promoting positive interaction and public trust.”

The personnel of the Spencer Police Department are dedicated to their cause and will continue to cooperate with the citizens they serve to keep Spencer a safe place to live and work.

Patrol Services are the foundation of any police department. The Spencer Police Department has 4 lieutenants and 14 officers assigned. Their responsibilities involve responding to citizens needs and initiating preliminary investigations, there are also times officers will conduct their own follow up investigations. Patrol Services also play an important roll in traffic accident investigations.

Police Officers are required by state law to have at least 36 hours of training in 3 years in order to maintain their state certification. The Spencer Police Department has undertaken this responsibility by using a combination of “in-service” training and outside training. In order to limit costs, and to provide more agency specific training, Spencer Police Department has sent officers to instructor certification schools. These certified instructors then provide proper training to our officers.

The basic concept of Community Policing is the partnering of the police department with the community in an effort to identify and resolve small problems before they become big problems. This “partnering” is accomplished through day to day interaction between the police and the community by a variety of means. Communication, Cooperation, and Education are the keystones to a successful Community Policing/Crime Prevention format. The Spencer Police Department has been committed to this philosophy for many years and the results are evident as we have one of the lowest crime rates per capita in the state.

Neighborhood Watch: A nationwide program that has been in existence for over 20 years. Neighborhood Watch attempts to re-establish the concept of neighbor watching out for neighbor. The Police Department acts as a facilitator to assist in organizing geographical areas and providing the necessary information and materials to get started in addition to providing a quarterly newsletter. Neighborhood Watch provides the forum necessary for police and citizens to work together in order to address problems specific to their particular areas. Spencer currently has 23 watch areas, which involves over 90 % of the residences in town.

Operation Child I.D.: For over 20 years the Spencer Police Department has been involved with the local school systems in fingerprinting and photographing Spencer students. Once a year, with the parents permission, kindergartners and new students to the area are fingerprinted and photographed for the purposes of identification should they become lost or missing. The schools or parents then keep these records. It is estimated that over 3600 students have participated since the programs inception.

DARE: A popular nationwide problem, DARE has been taught in Spencer School System for 18 years. DARE is taught by a sworn police officer from the Spencer Police Department who has gone through an intensive two-week training session by DARE Iowa. DARE is a twelve week program that is taught once a week for an hour to Spencer 6th grade students. It attempts to teach life skills, and provide education on the effects of drug use and abuse. DARE also provides an excellent opportunity for police officers to interact with young students and establish a report that lasts a lifetime.

Spencer Police Bike Patrol: A program that started in May 2000. Three SPD officers were sent to the Iowa Law Enforcement Academy to learn tactical applications for the bike patrol, as well as handling different riding situations. The Spencer Bike Patrol provides an opportunity for better interaction between officers and citizens. Bike Patrol also allows officers to travel in areas that are not generally accessible by motor vehicle, it also provides an advantage for observing and detecting criminal activity.

Bicycle Safety Program: Held in the spring of the year, children in the Spencer community are invited to a one-day session at the Clay County Fairgrounds to receive instruction by SPD officers on bike safety and rules. There is also an area set up for children to then try their bike riding skills.

Police Memorial Week: A national event that takes place in May of each year. During 2000 area law enforcement agencies decided to participate by setting up a display of vehicles, and other equipment, in South Park Mal in order to provide the public with the opportunity to observe and ask questions. A series of articles were also published in the Daily Reporter who informed the public of the many different services and tasks police officers perform. The Iowa State Highway Patrol, Clay County Sheriff, Iowa DOT, and the Spencer Police Department participated.

Student Job Shadow Program: This program provides area students who have an interest in policing as a career with the chance to spend several hours with an SPD officer. The student will ride with a police officer during a normal shift and receive a more realistic perspective of an officer’s duties and responsibilities.

Iowa Lakes Community College Internship: In conjunction with the ILCC’s Criminal Justice Program, ILCC students who major in this area are required to do an internship of 200 hours with a law enforcement agency. SPD began this partnership with ILCC in 1999 and has had several students participate.

Vacation House Watch: A service that has been provided to Spencer residents for. Persons going on vacation can notify the police department to advise them of the dates they will be gone and other pertinent information. This is then placed on a list and is a courtesy check of the house is done on a daily basis. If the officers observe any suspicious activity they will take appropriate action and notify those concerned.

Talks and Tours: SPD over the course of a year will furnish public presentations by request on a wide range of topics. In addition numerous tours of the police department are organized for interested persons and groups. SPD officers are available at any time to groups or service organizations that may be interested in receiving information on any police related topic or trend. Some topics covered are drugs, search and seizure, OWI laws, bike patrol, sex crimes and assault, and other crime prevention.

Crime Stoppers is based on the principle that someone other than the criminal has information that will assist in solving serious crimes. Two concerns often keep witnesses from coming forward. Crime Stoppers addresses both of them!

The Citizen’s fear of involvement is reduced by the caller’s name remaining anonymous; and the citizen’s apathy is solved by paying cash rewards if the information leads to arrest and indictment.

Private Citizens- A corporate board is composed of volunteers. The board if responsible for raising funds, determining reward amounts and making payments, and overseeing the program in general.

Law Enforcement-Actual operation of the program is handled by the local law enforcement agencies involved. A separate telephone line is placed within the department and a Crime Stoppers coordinator is appointed. Callers do not give their names, but receive code numbers- which assure anonymity- to be used in all subsequent transactions.

The caller is asked to contact Crime Stoppers again within a give period of time. Meanwhile, the information is referred to the appropriate investigative personnel. If the information leads to arrest and indictment of a serious crime offender, the caller is eligible for a reward, and arrangements are made for payment. It is not uncommon for a caller to refuse the reward.

Media-Publicity is crucial to the success of Crime Stoppers. In order to maintain a high profile within the community, a specific unsolved case is selected as “Crime of the week”. Newspapers and radio stations are furnished with a detailed synopsis of the case, and the television stations air a reenactment of the crime. Instructions for calling Crime Stoppers, information concerning the reward, and the telephone number are included by all the media. The anonymity of the caller is always stressed.

The Spencer Police Department continuously strives to protect and serve the community through a variety of ways that include enforcement, education, prevention, and cooperation. We are an organization dedicated to customer service and the ethical treatment of all persons.

The Lakes Area Law Enforcement Employment Co-op is a group of 11 law enforcement agencies in a four county area of northwest Iowa. These agencies (listed below) have grouped together to share the financial costs of eligibility tests and to make the application system more efficient for both the agencies and the applicants themselves. Applicants who participate in this testing procedure will be eligible for any and all of the agencies within this cooperative that they choose. All law enforcement positions in these agencies will be filled from the list established by this testing procedure.

The City of Spencer continues to be one of the safest communities to live in the State of Iowa. Recent crime statistics show Spencer has one of the lower crime rates in the state in relation to cities of comparable size. This can be attributed to many factors but one of the most prevalent and important is the relationship between the citizens and the department. Continued efforts in building partnerships and the sense of share responsibility to the quality of life will continue to be one of our main goals in order to provide the best in services and protection.